skip to main | skip to sidebar

6X6 Relieves What Bothers You

Last night curator Sabrina Cuadra helped the 6X6 audience relieve their pent up doldrums through a little discomfort therapy. With assistance from musicians/noise smiths Bryan Poole, Aaron Jollay, Stephen Cramer, Nate Mitchell, and Alice Serres, Cuadra encouraged the audience to scream when they "couldn't take it anymore." And scream they did.

Up next: Time, curated by Brian Hitselberger. Submit by January 21st.
Posted by 6X6 at 6:48 PM No comments:

6X6 Relief: Get You Some 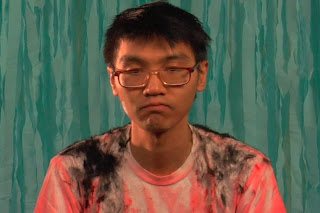 There will be a lot to be relieved about once this 6X6 has its way with you: curator Sabrina Cuadra will help you have a cathartic meltdown this Wednesday, December 1 from 7-8pm at the Ciné Lab. Faster, funner, and freer than psychotherapy, Relief will feature works from Mexico, Spain, California, Texas, Romania, and little old Athens. Haircuts, soapsuds, deranged women -- when it's all over, nothing will ever bother you again. Or at least until the next 6X6.

About The Curator:
Sabrina Cuadra's work is a mixture of of performance art, sound art, and video art, influenced by her Argentine and Miami heritage. Under the moniker "Whistling School for Boys" she performs in rock show settings, combining light, color, found photos and footage with original music and audience participation, shining a light on the ordinary. She seeks to redefine artist-audience boundaries, shattering expectations that any audience might have. Since 2006, WSFB has had appearances at the New Art School's Rock vs. Art VII at the glorious underground pub Churchill's in Miami's Little Haiti, at Electronic SubSouth's first Women Of Electronic Music showcase in Gainesville, Florida, the Athens Popfest at Little Kings Shuffle Club, Flicker Theater & Bar, and ATHICA. WSFB has also projected videos during concerts by the Microphones, Everybody Everybody, 63 Crayons, Flash to Bang Time and Soul Spectacular dance parties in Athens. Her video collaboration with Connie Mae Oliver for Animal Collective's "Purple Bottle" has been viewed over 300,000 times on Youtube. Nobody leaves a WSFB performance without excitement and/or confusion.
Posted by 6X6 at 7:46 AM No comments:

Promote Your Page Too